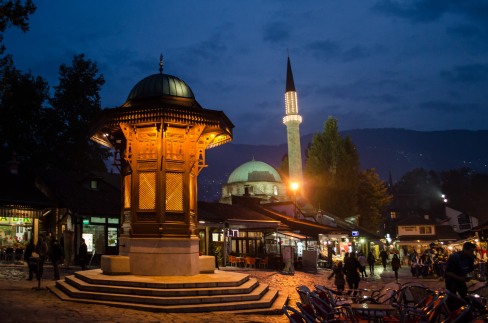 A new agreement between China and Bosnia allows visa-free travel for citizens of both countries, which the Balkan state believes could boost its tourism industry.
China and Bosnia’s agreement to waive visas for ordinary passport holders became effective on Tuesday and could enable Bosnia to profit more from Chinese tourism, officials believe.

The agreement originated at the sixth annual summit of heads of government from China and 16 Central and Eastern European countries in Budapest in November 2017.

“Last year there were 17,000 tourists from China, which is five times more than in 2011. And we need to offer them more, so they will continue coming and staying longer,” Bosnia’s minister of foreign trade and economic relations, Mirko Sarovic, told media after the summit.

According to the agreement, holders of valid ordinary passports of both countries will be exempted from entry or transit visas for a period of stay up to 90 days in any 180 days.

BIRN contacted several tour agencies in Sarajevo and found that only one currently offers travel to China.

Denis Huseinbegovic, the owner of Jungle Travel Agency, said that the visa-free agreement is likely to boost interest in China.

“We do have quite a high level of people who are interested in visiting China, even though at the moment they need to travel from the airport in Belgrade, and for sure visa liberalisation will have positive effects,” Huseinbegovic said.

In three first months of 2018, the Tourist Community of Sarajevo Canton recorded 1,082 tourists from China, a similar number to the same period last year.

“We do expect an increase in these visits from China now they can travel without visas,” Nermi Muzur, the director of the Tourist Community of Sarajevo Canton told BIRN.

Muzur said tourists from China are interested in the colourful history of Sarajevo and Bosnia and most of them enjoy trips into the mountains around the capital.

Bosnia does not have state-level body in charge of tourism, as it is under the jurisdiction of two entity-level ministries.

The Ministry of Tourism and Ecology in the Bosniak- and Croat-dominated Federation entity and the Ministry of Trade and Tourism in the Serb-dominated Republika Srpska entity could not provide an answer by the time of publication to BIRN’s questions about possible strategies to improve their offer to Chinese tourists in light of the visa-free agreement.

China is the fifth largest source of imports for Bosnia – 6.3 per cent of the total amount, according to data from the Statistics Agency of Bosnia for 2017. Germany was in first place.

The most-imported items from China are electric appliances, generators, turbines, boilers and piston engines, but imports also include textiles and footwear.
Source: https://balkaninsight.com
All News