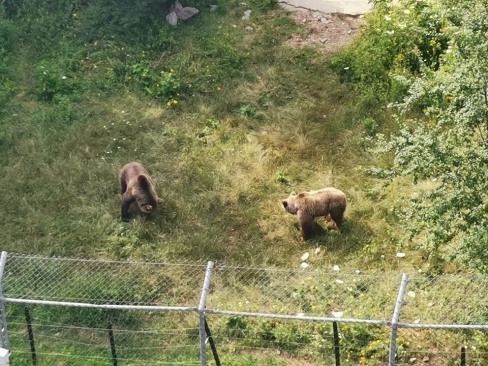 Strong tourist interest in the Dancing Bear Park is reported in Belitsa. This year, under the sign of the coronavirus epidemic and a more closed way of life, the flow of tourists has not decreased, the park manager Dimitar Ivanov told BTA . There were fewer foreign tourists, but on the other hand, the interest of Bulgarians has increased significantly, he added. The park is expected to continue to attract tourists until it closes on December 1st.

THE PARK FOR READAPTATION OF DANCING BEARS NEAR BELITSA IS THE FIRST LARGER SITE THAT ATTRACTS PEOPLE FROM THE COUNTRY AND ABROAD TO THE HIGH MOUNTAIN TOWN.

It opened in 2000 to provide dancing bears with a natural environment and a safe place to live. This allows local people to start thinking in the direction of tourism development, which gradually manages to turn the highland municipality into a tourist destination.

The first attempts to make guest houses work were in the years after the bear park opened its doors. In 2009 the local community center is working on a project related to the promotion of cultural, historical and natural resources of Belitsa. At that time there were four guest houses, said the secretary of the Chitalishte Maya Padareva. People's expectations for the development of tourism at that time were not met and most closed their doors. Only one of them remains to work. Among the reasons is the poor infrastructural condition of the municipality. The roads in Belitsa have not been paved since the 1970s, and public buildings have been neglected, Maya Padareva said.

The situation changed in 2015, when the new municipal leadership took on the task of turning Belitsa into a modern European municipality, following the example of many other municipalities in the region and in the country.

INVESTMENTS IN INFRASTRUCTURE SITES IN THE MUNICIPALITY SINCE THEN ARE OVER BGN 15 MILLION,

Belitsa Mayor Radoslav Revanski told BTA. They are aimed both at the municipal center and in each of the settlements.

Dozens of streets have been asphalted, including the most remote settlement in the municipality - Ortsevo, which is the highest village in Bulgaria. For several years it has also become a tourist destination.
Investments in infrastructure and the creation of conditions for business implementation lead to the opening of a number of tourist sites in the municipality. One of the newest is an alpine amusement park, which is the first in the country. For those looking for thrills from this year in the picturesque area of вЂ‹вЂ‹Belitsa there is a park for paintball.

Restaurants with attractions have opened their doors, small settlements are focused on the development of rural tourism, and for nature lovers there are several marked hiking trails.

With these investments, hundreds of jobs have been provided for local people. According to the municipality, in 2015 the unemployment rate was over 60 percent, and now it is around 35. The mayor pointed out as a reason the fact that he insists on the companies that work on public sites in Belitsa to hire local people.

Among the main projects for tourism development in the municipality is REVIVAL OF THE WINTER RESORT SEMKOVO.

Now the road to it is being repaired, but in order for the resort to develop, its status must be changed and the state forest fund must become municipal, said Radoslav Revanski. The facilities there were built more than 50 years ago. However, according to the municipality, the place is visited by more than five thousand tourists a year. Investors who are ready to invest in the resort are not missing, and if it comes to its renovation, it will be another large site in the municipality and a great opportunity for the local population, said the mayor.