The Complete Guide To: Transylvania 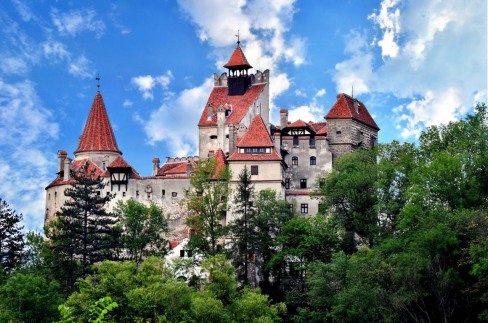 Some people assume Transylvania is an invention of Bram Stoker, ripened by bloodthirsty Hollywood directors. However the "land beyond the forest" – as the Latin name translates – is genuine enough. This region, three times the size of Wales, is located right in the heart of one of the EU's newest members. While the Romans called it Trans-Sylvania, the name is Ardeal in Romanian, Erdely in Hungarian and Siebenburgen in German. The latter translates as "seven fortress towns", and hints at the significance of Saxons shipped in during the 12th century from Flanders and the Moselle Valley to defend the sparsely populated region from repeated invasions.

Those seven towns (Bistrita, Brasov, Cluj-Napoca, Medias, Sebes, Sibiu and Sighisoara) are great survivors. They emerged relatively unscathed following the brutal years of Ceausescu's communist tyranny from 1965 to 1989 and have since been restored to their former imposing elegance. Any of the seven makes a good base for exploring Transylvania, though Sibiu, Brasov and Cluj-Napoca offer the chance to dine like nobility and sleep in regal surroundings for bargain prices.

Film fans might imagine that Transylvania is a dark, foreboding region filled with mountains, creepy castles on crags, pale-faced nobles with sharp teeth, and a menacing menagerie of wolves, bears and flapping bats. The real Transylvania is more of a daylight fantasy: flower-filled meadows, lost-in-time villages, sun-drenched plains dotted with Saxon churches and castle ruins, and family-friendly ski slopes. This complex and exciting region makes a superb holiday destination.

Transylvania still pushes the Dracula link, as the tourism bosses seek to get their teeth into the European market. Bran Castle, close to the city of Brasov, is always advertised as "Dracula's Castle", though Vlad the Impaler, the man behind the myth, stayed here only for a few nights. Bran Castle museum opens 9am-4pm daily except Monday in winter, and 9am-6pm daily (Mondays from noon) in summer; admission 12 lei (£3). The castle is ringed with stalls offering Dracula mugs, T-shirts and tea cloths.

There are plenty of other creepy castles where you might imagine the old count flapping his cape and laughing in sinister fashion. The Saxon fortress town of Sighisoara is an essential stop on any tour of Transylvania, Dracula-hunting or otherwise. Sighisoara has a Dracula café, Casa Dracula within the citadel walls. This has a much-photographed plaque referring to the father of Vlad the Impaler, which reads enticingly "Vlad Dracul". Endless shops proffer vampire tat. For a full-blooded experience, stay at the Dracula Country Club located just out of town on the road to Medias. A double will cost you 130 lei (£32), including breakfast.

Another entertaining hotel, the Dracula Castle, is found in the fragrantly named town of Turda. It has bathrooms created from stone grottoes and an over-the-top medieval banqueting hall with gory murals, skeletons and skulls. Doubles cost 204 lei (£51), including breakfast. The castle makes an ideal base for visiting the beautiful Turda gorge and the excellent salt mine open 9am-3.30pm daily; admission 8 lei (£2).

Transylvania's beautiful, unspoilt landscape is dotted with imposing medieval castles, elegant palaces, Saxon fortress-churches and crumbling ruins. Visit the magnificent Corvin Castle at Hunedoara to see an icon of Transylvania. Patrick Leigh Fermor, who travelled through the region on his long walk from France to Turkey, called the castle "fantastic and theatrical". It is next to a communist-era steel factory, but transcends the dour location. It opens 9am-3pm (until 6pm in summer) daily except Monday, admission 6 lei (£1.50).

The chunky Fagaras fortress recalls the 17th-century battles of Transylvanian prince Gabor Bethlen, though in the 1950s the Communists turned it into a prison for dissidents. The restored castle is now used as a museum and library, opening 8am-4pm daily except Monday from October to April, to 6pm in summer.

In the Prahova Valley, renowed for both wine and skiing (though not at the same time), the sumptuous Peles and Pelisor Palaces were homes to the English-born Queen Marie (1865-1938), who preferred their elegant rooms to the draughty Bran Castle.

Peles Palace has 170 rooms. It was the first castle in Europe to feature electric lighting, an electric lift and central heating. Peles opens 9am-5pm daily except Monday (Tuesday from 11am), admission 9 lei (£2.25).

Nature lovers will feel they have stepped into an unspoilt medieval landscape of rolling hills, lush meadows, oak forests and fence-free fields dotted with haystacks. Traditional, wildlife-friendly agriculture makes Transylvania one of the best places for fauna in Europe.

Dan Marin, an award-winning guide, leads tours around the gorgeous Piatra Craiulai National Park. "There is a very healthy population of red and roe deer and wild boar," he says. "The variety of habitats – flood plains, river margins, hay meadows, forest hills and high mountains – is home to an impressive number of butterflies, birds, mammals, reptiles and amphibians." Dan and his wife, Luminita, created a lovely guesthouse, the Transylvanian Wolf House, in the village of Zarnesti. A double room costs €45 per person per night with all meals included, €25 for B&B accommodation. The day walks cost €70 per group, with transport paid separately at a rate of €0.30 per kilometre.

Dan takes visitors bear-tracking, birdwatching and on visits to the local Roma community, while Luminita prepares Romanian and Roma dishes. Some two million Roma (the official name for Gypsies) live in Romania, though the similarity in the names is coincidental. Many Roma communities are based in Transylvania on the outskirts of larger towns.

Transylvania is watered by many rivers, and large lakes provide the venues for sports, fishing and relaxing holidays. The spooky St Anna Lake is the only intact volcanic lake in Europe; nearby are rare peat bogs and sulphur caves. In summer, a tent city grows at the waterside as locals come to swim, go boating and have barbecues on old-fashioned family breaks.

Mountains surround Transylvania. The borders of the region are defined by the swooping crescent-shaped loop of the Carpathians enclosing all but a small stretch in the northwest. Transylvanians love winter sports, and with the arrival of the first snowfall they head for Poiana Brasov, the best-equipped resort in Romania. The slopes suit beginners and intermediates and there are excellent nursery slopes.

Iglu Ski offers seven-night, all-inclusive packages departing London or Manchester from £465. The gigantic Hotel Piatra Mare has every luxury under the sun, while the Vila Zorile provided a comfortable base for Nicole Kidman and Jude Law when they were filming Cold Mountain nearby.

South of Brasov, en route to Bucharest, the Prahova Valley holds a clutch of ski resorts. Sinaia, the "Pearl of the Carpathians", boasts a collection of cable cars that sway up to the towering peaks at 2,000m. Busteni is a health resort and gateway to the dramatic Bucegi (bucegipark.ro) mountains and Natural Park, and is filled with houses that wouldn't look out of place in The Addams Family. Meanwhile, Predeal (predeal.ro) is the highest town in Romania, at an elevation of 1,033m.

Head for Saxon villages such as Biertan and Viscri to see a way of life that hasn't changed in centuries. Many Saxons left for Germany in the 1980s under a "cash for countrymen" deal paid for by the Federal Republic. Some, though, such as the Fernolend family, remain in Viscri. Caroline Fernolend now works as director for the Mihai Eminescu Trust  arranging accommodation for visitors in traditional houses in villages such as Viscri, Biertan, Crit and Malancrav. In Malancrav, remaining Saxons hold a "Kronenfest" every July with suitable bacchanalia.

Other places to stay?

How about an heir's house? Prince Charles liked Transylvania so much he bought a property in Viscri, and he is a frequent visitor. The house was sensitively restored by another noble, Count Tibor Kalnoky, and you can book HRH's property through the count's company.

At his family seat of Miclosoara, Count Tibor Kalnoky has created a wonderful holiday complex of rooms restored in the tradition of Szekely (Transylvanian Hungarians). Guests spend the day birdwatching or visiting caves, waterfalls, fortress churches and historic cities, then taste delicious Hungarian cuisine under an arbour in the garden. In winter, the 17th-century wine cellar is at guests' disposal by a roaring fire.

For yet more noble nights, aim for Zabola. Countess Mikes returned here after decades in exile. Her sons Gregor and Alexander work on rebuilding the estate and its many buildings. Gregor's wife, Zsolna, converted the interior of the Machine House into an elegant boutique hotel (n traditional surroundings.

Brasov, Targu-Mures, Cluj-Napoca and Sibiu offer urban comforts and sophisticated hotels. But to get a taste of Transylvania it is better to stay in a village and watch the evening cow parade or the regular traffic of oxen-pulled carts, wandering wild horses and trailers piled high with hay.

At Rosia Montana, in Transylvania's gold-mining country, a Belgian woman named Françoise Heidebroek has restored a farmhouse, Ursita Inn, where visitors can bathe in mountain streams and mingle with the ethnic Moti shepherds in the village.